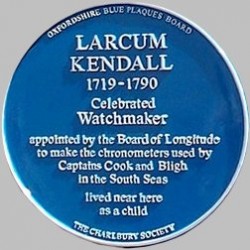 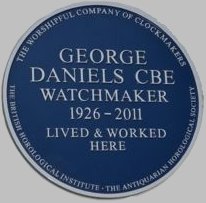 Famous clockmakers from the past have also not been forgotten. Thomas Tompion and George Graham are both buried in Westminster Abbey and there is a blue plaque for them on the site of their workshop in Fleet Street, London.  There is another plaque for Tompion on the forge in Ickwell, Bedfordshire where he lived and worked prior to moving to London around 1664. 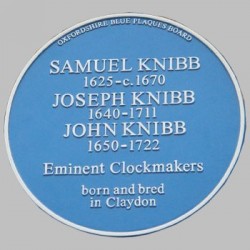 The Knibb family, brothers Samuel, Joseph and John, are all remembered on a plaque in the village of Claydon , Buckinghamshire where they were all born.  Joseph Knibb is the most famous of the three brothers, but as far as I am aware no plaque for him exists in London where he worked. 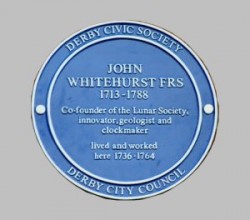 Another well known clockmaker, John Whitehurst, is remembered in his home town of Derby. He is one of the very few provincial clockmakers to have had a book written about his life and work. It’s a good book, now out of print, but we usually have copies in stock.

Visitors to Coventry may be interested in the Coventry Watchmakers Heritage Trail, a route with many plaques showing where watchmakers lived and worked, including the last remaining building of the Rotherham factory on Spon Street.

I know of a few more – Thomas Walder and John Harrison, the inventor of the marine chronometer, but I am sure there must be many more clock and watchmakers remembered in this way.  If you know of any others please let me know.

This entry was posted in clockmakers. Bookmark the permalink.