He was born in Somerset in 1800, the son of a clockmaker. Cole moved to London in the early 1820’s but was not working independently until about 1838. By 1845 Cole was calling himself a ‘designer and maker of ornamental clocks’ and exhibited as such at the Great Exhibition of 1851 at Crystal Palace. Thomas Cole died of typhoid fever on 3rd January 1864.

At the Great Exhibition he exhibited a new design of clock  – the flat, portable clock known as a strut clock.  This was a great opportunity to publicise his work and to show off his unique designs.  Popular designs were an oval 30 hour strut clock, a rectangular strut clock and a tripod clock.

Cole constructed over 1600 clocks, each one slightly different from the next and the designs were very original and exciting.  I always get a thrill when I find a Thomas Cole clock because you never know how it is going differ from what you have seen previously.

Thomas Cole numbered his clocks in sequence, apparently starting at 500 around 1846 and by the time he died in 1864 the number was no higher than 1900.  There were, however about 200 clocks made before he started his numbering system. 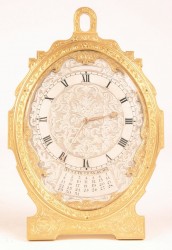 The quality of the engraving on the cases and dials of Cole’s clocks is of an exceptionally high standard.  You often see clocks described as ‘in the manner of Thomas Cole’, but to the experienced eye, the work of Thomas Cole can be clearly identified by the design of the case and the style of the engraving.

The cases of Thomas Cole’s strut clocks are all based on a central casting.  The casting then had various layers of decoration applied to give a crisp edging to the case.  Each case is different from the next. The dials are all slightly different t00, different dial masks and different engraving patterns. 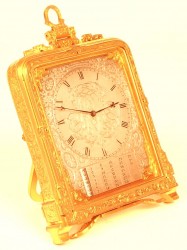 As well as strut clocks Cole made a small number of carriage clocks and  mantel clocks as well as clocks in the form of a mortar and also a candlestick.

I have been collecting Thomas Cole clock serial numbers over a period of years to try and understand just how many special design clocks he made. So if you have a Cole clock I would be delighted to hear about it and see a photograph.

The book ‘Thomas Cole & Victorian Clockmaking’ by John Hawkins, published in 1975, gives an in-depth study of Thomas Cole, with lots of pictures of various designs as well as information about the retailers who stocked Thomas Cole’s clocks. Copies of the book are available on our website.

This entry was posted in clockmakers. Bookmark the permalink.